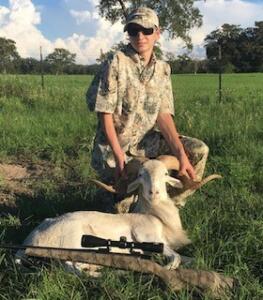 Kaston was born on November 22, 2002 in Amarillo, TX.  He was diagnosed with Tricuspid Atresia when he was 1 day old.  All of his cardiac care has been at Children’s Medical Center of Dallas up until the last few months.  He had his Glenn at 6 months old and his Fontan at 22 months old.  Then he had a fenestration closure around age 4.  He is now a junior in high school, driving, working, dating and just being an all-around normal teenager!

We became involved with an organization called Mended Little Hearts in 2009 and started the Amarillo chapter.  We were attending a Mended Little Hearts national conference at Texas Children’s Hospital a couple of years ago and Hunt with Heart had a speaker there and did a presentation for all of the parents about the organization.  I stopped by their booth and met Allison.  I knew that this would definitely be something that Kaston would be interested in being a part of.

Kaston has always been adventurous and had a great love for the outdoors since he was little.  He had his first camping trip and boat ride when he was a couple of months old and has grown up going to the lake and camping.  He started wake boarding when he was just 4 years old.  He has participated in all kinds of active things throughout his 16 years of life.  He earned his blue belt in karate, did competitive indoor rock climbing, played soccer, basketball and t-ball, but his love has always been the outdoors.  He finally got clearance to go to higher altitudes and started snowboarding when he was 12.  For his 15th birthday, we took him scuba diving in Mexico…of course with cardiology approval first!  He has definitely not been your average single ventricle patient!

His dad’s background is law enforcement and has been an avid hunter & fisherman his entire life and our kids have followed along in his path.  Kaston loves fishing and hunting and is currently a part of the Randall County 4H Shotgun program where he competes in trap, skeet & sporting clays.  His sister prefers archery!  They have both grown up in blinds, whether it be bird hunting, hog hunting or deer hunting.  It’s been a great opportunity to teach them anatomy & physiology since both of our kids have been homeschooled for most of their lives!

After talking to Allison about Hunt with Heart and what this program provides for kids like Kaston, I knew that we needed to get him involved somehow.  With us living so far from Houston, I knew it would be a little challenging, since we are about 10 hours away.  But I gave Allison our info, thinking that maybe just by chance, Kaston might be invited to attend a camp someday.

Well, a spot opened up for him last minute for the Fall 2018 camp and Kaston & his dad were able to make the trip down south.  And it was life changing for both of them!  I think his dad had just as much fun as Kaston did, because he got to share such an amazing experience with his son on a different level, because of Jim & Jo Anne’s generosity and all of the people involved with Hunt with Heart and Camp Beaver Creek.  It just blew them away.  And of course, Kaston’s dad made quick friends with Joe because of his many years in law enforcement.

Back around that time, he had his scheduled 6 month work-up in Dallas and they wanted to do some liver testing (as single ventricle patients will typically have some liver scarring)  HIs initial work-up showed that he was having some liver issues and that he had progressed further along in Fontan Associated Liver Disease (FALD) than what they had expected.

We started asking around about who had the most knowledge and experience with FALD and learned that TCH has a dedicated Fontan program with close liver monitoring and were actively involved in some study trials with the top researchers in the country for this newfound problem.  We also found out unfortunately that our insurance was no longer going to be accepted in Dallas.  So, we were looking to change providers anyways.  With our knowledge of TCH being THE top-rated cardiac center as well as a strong GI/Hepatology program, we – along with Kaston – decided to go ahead and transfer his care to Houston.  It was reassuring knowing that we had already established some relationships so far from home through Hunt with Heart, so it made the transition to a new center a little easier.

In May 2019 we were graciously able to meet with Dr. Dreyer and Miss Corey, who tirelessly helped us get all the many appointments scheduled.  We also were able to meet with a liver specialist and have additional liver testing done along with extensive cardiac testing.  We are so grateful to Corey and the work she does not only for her patients at TCH, but for Hunt with Heart as well.  We are so extremely grateful to Dr. Dreyer and his team for taking Kaston on as a new patient and helping us get everything transferred and being aggressive in his plan of care.

We know without a shadow of a doubt that that one chance meeting with Allison at a conference we both happened to be attending opened up the possibility not only for Kaston to become a part of the Hunt with Heart family, but helped us ease into transitioning his care over to Texas Children’s Hospital.  We are so blessed to be considered as part of the Hunt with Heart family.  I hate that we are so far away because we do miss most of the events but have made a promise to make it down there as much as possible, especially for the Sporting Clays event!